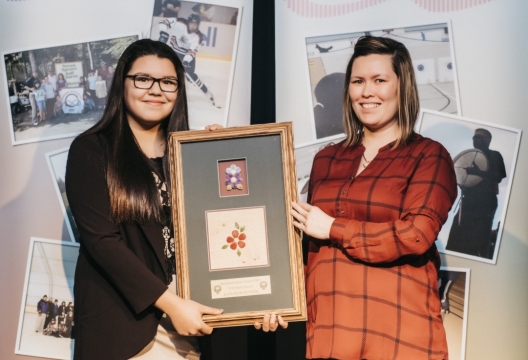 Kayleigh Hunter, from Fort Resolution, has been active right from a baby. Never wanting to stay indoors and always running and playing; She was always completive and would challenge her older brother to running races. She would go to the NWT track meet to watch her brother compete and be so upset that she wasn’t old enough. Once she was old enough there was no stopping her!

Right from the age of 5 she would join any sporting event held in the community and school, and always gave 110%.  She loves all sports: soccer, track and field, volleyball, baseball, badminton, Dene games, swimming, and hockey.  She has won an overall gold and silver at the NWT Track and Field Championships and also broke the shot put record 4 times (last year she broke it 3 times with each throw). At the 2016 AWG’s, Kayleigh came home with 5 ulu’s -  including an overall silver.

Sports and competition aren’t Kayleigh’s only passion; she also enjoys, and makes time for, her tradition and culture. She goes out on the land with her father to hunt, trap, and fish, and was out on the trapline by the age of 4! She knew the land so well that, at the age of 11, when her father broke down on his trapline, Kayleigh started up her skidoo, took off and found him, and towed him back home. When she fishes, springs hunts, and set snares she always shares with the elders. Last year she caught a rabbit for every elder in Res!

Volunteers can be hard to find in small communities, but the Hamlet of Tuktoyaktuk considers itself lucky to have had Charles Pokiak and Pat Kuptana step up to coach hockey - for decades!

Having played for many years themselves (and still seen lacing up the skates for Old Timers and recreational hockey tournaments), Charles and Pat moved to coaching in the 1980’s. They found it was a good way to keep kids out of trouble and stay active. In 1986, with the help of Roland Kuptana and the late Dennis Trasher, Charles and Pat started the first Hockey Club in Tuk, dedicating 35 hours per week to coaching. Over the years, they have coached novice to midget teams at both local and higher level competition. These men have worked tirelessly, and without complaint, to bring the sport of hockey to kids in the Beaufort Delta for generations. Many of the kids coached by Charles and Pat in the past now have families of their own, and their children are still being coached by these men.

Fueled only by the passion they have for the game and the joy they receive by giving back to the youth, they deserve special recognition for the considerable amount of time they have dedicated to coaching! 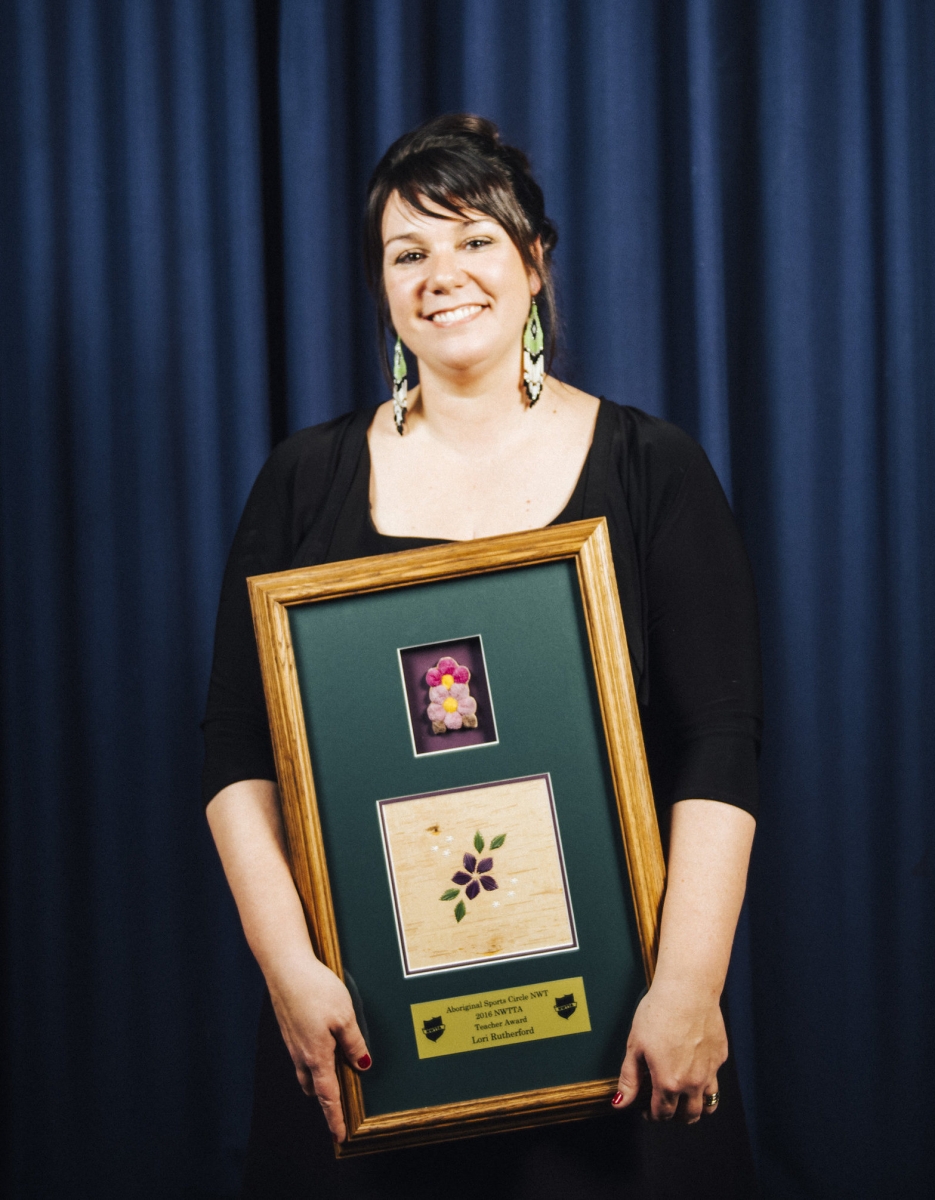 Lori Rutherford-Simon is an aboriginal teacher originally from the east coast. Lori was born in Newfoundland and spent most of her childhood in the east coast with her two sisters and very large extended family. Lori has also lived in the U.K. and Nepal, where she hiked to the base camp of Mount Everest!

Lori received her degrees from Acadia University and started her teaching career in the U.K. She then moved to Fort Smith where she met her husband, Chris, and had 6 children - and has lived very happily  for the past 17 years.

Lori enjoys coaching and going out on the land on canoeing trips with her students and family. Through her school, P.W.K High, she has coached volleyball, basketball, badminton, X-country, track and field, and soccer. She also sits on the organizing committee for the Lawrie Hobart memorial volleyball tournament.

Lori also coaches the local swim team and the Nordic biathlon team within the community. She has helped coach many athletes that have gone to the AWG’s and have helped her athletes achieve their personal best and athletic goals. This upcoming year, Lori is going to the 2017 NAIG with the swim team and 2017 CSG’s as the manager for the girls soccer team. 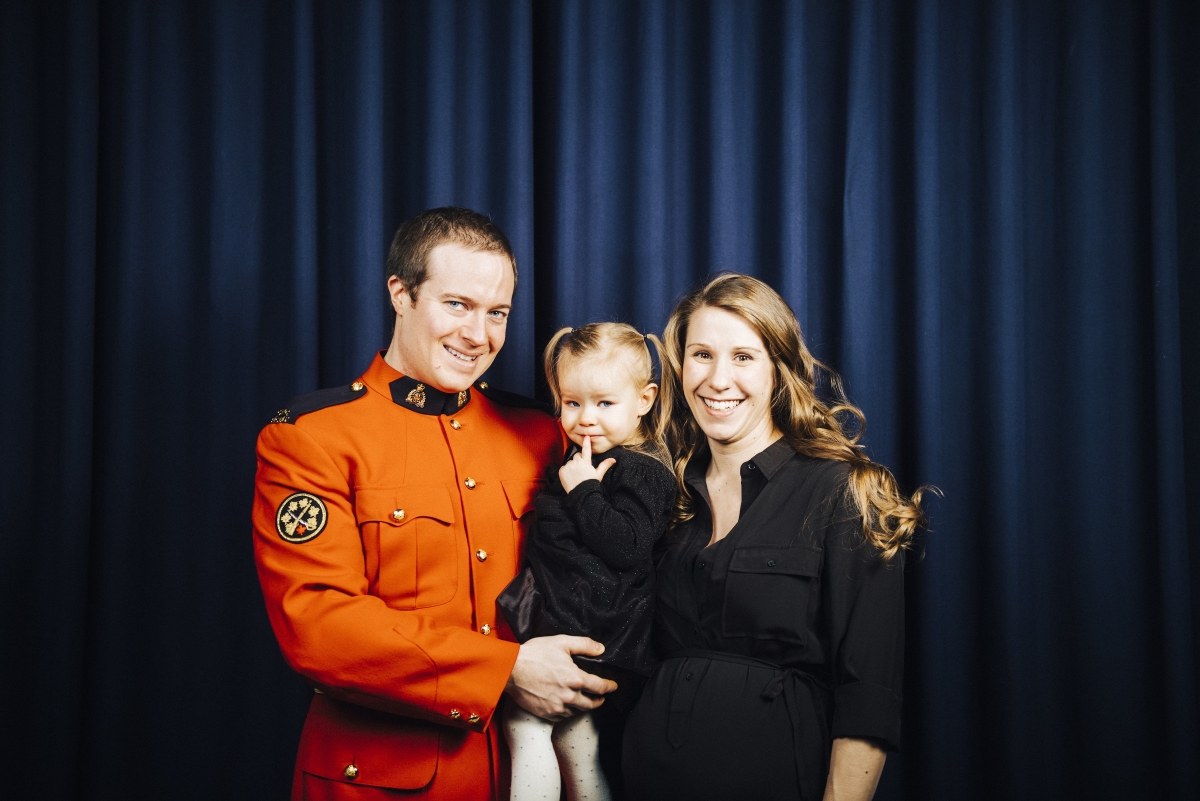 (Cst. Marsh with his family)

Cst. Duncan Marsh grew up in Nova Scotia, in the towns of Weymouth, Bear River, and Halifax. He graduated from Depot on February 5th, 2007 and was immediately posted in Surrey, BC, where he worked for four years. He transferred to the Lower Mainland District Emergency Response Team (ERT) in January of 2011 and worked there until May of 2013, when he transferred to Behchoko. In July of 2015, he was transferred to Ulukhaktok, where he is currently employed.

Ulukhaktok had a newly established Snowshoe Biathlon program for the 2016 Arctic Winter Games (AWG) when he arrived, set up by the school Principal, Richard McKinnon. Marsh’s wife, Kelly, is a teacher at the school and, through her, Richard found out Cst. Marsh had a background as a sniper/observer with ERT and asked him to work with the kids’ shooting. At that time there were two students training, Jacob Klengenberg and Lucy-Anne Okheena. The AWG’s were in a few months, so Cst. Marsh’s wife pitched in to help and within a few weeks, between Marsh, Kelly, and Richard, they had the students shooting, running, and conditioning three times a week.

Jacob and Lucy-Anne both made it through the AWG territorial trials and traveled to Greenland - both coming home with medals in their divisions! Since this success, the Biathlon program has gotten a lot of interest from the other students and has really taken off, with 7 candidates for the 2018 AWG’s -  Ulukhaktok will be representing the NWT very well in 2018! 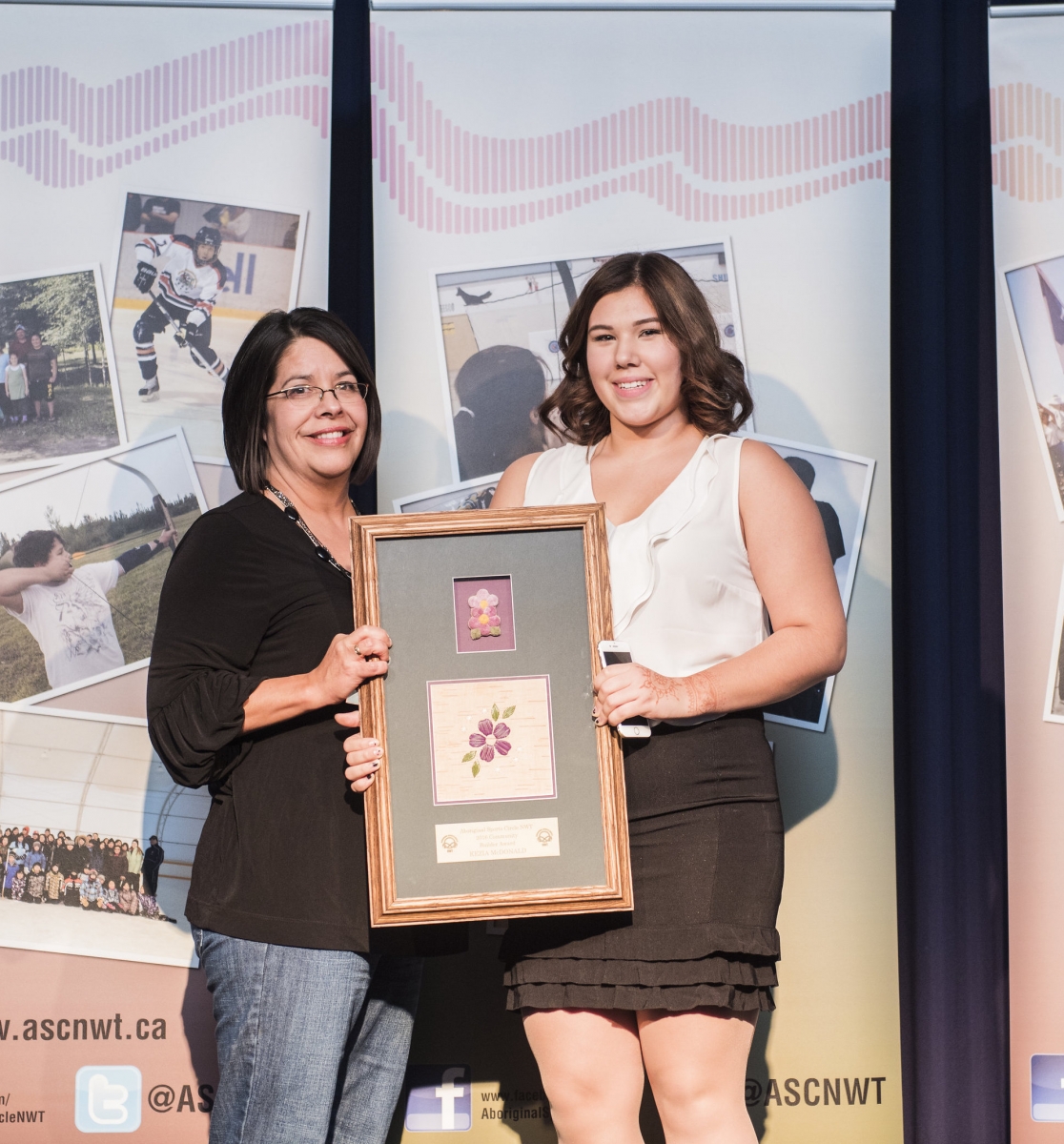 To some, Kezia McDonald may seem like an average 15 year old. She lives in Fort Smith, goes to school, plays sports, and hangs out with her friends. However, what most people don’t know is that she is consistently dedicating her evenings and weekends to help make her community a better place.

From a young age, it was evident that Kezia has the potential to be great. She has a determination and drive to accomplish things that some adults may never obtain. She works hard and takes pride in everything that she does. When Kezia was in Grade 8, she was chosen to take part in the PAGE program and represented PWK in Yellowknife as an ambassador for Fort Smith. This year, as a Grade 10 student, Kezia is the driving force behind Student Leadership at PWK High School. She rallies her peers by encouraging them to take part in school events: from clan activities, to school dances, to selling PWK Swag, her desire to make her school the best it can be does not go unnoticed.

On top of being involved at school, she volunteers her time to several different community programs. She is a volunteer at Northern Lights Special Care Home, a local care facility for elders, where she reads to the elders of the community. This winter, she will also be volunteering as a jigging instructor at the elementary school. Kezia dedicates her time to coach volleyball and is a CAN-Skate instructor. For the past two years, Kezia has helped run the Steve Nash Youth Basketball program in Fort Smith. She was one of the main volunteers for this program and contributed greatly to its success.

It is evident that Kezia is making a mark on the community of Fort Smith. She is the perfect role model for hard work and dedication. She has helped build successful programs in our community and is continuously the first person to volunteer her time for many different causes. Kezia is the type of person that will always be a leader. She is destined for greatness! 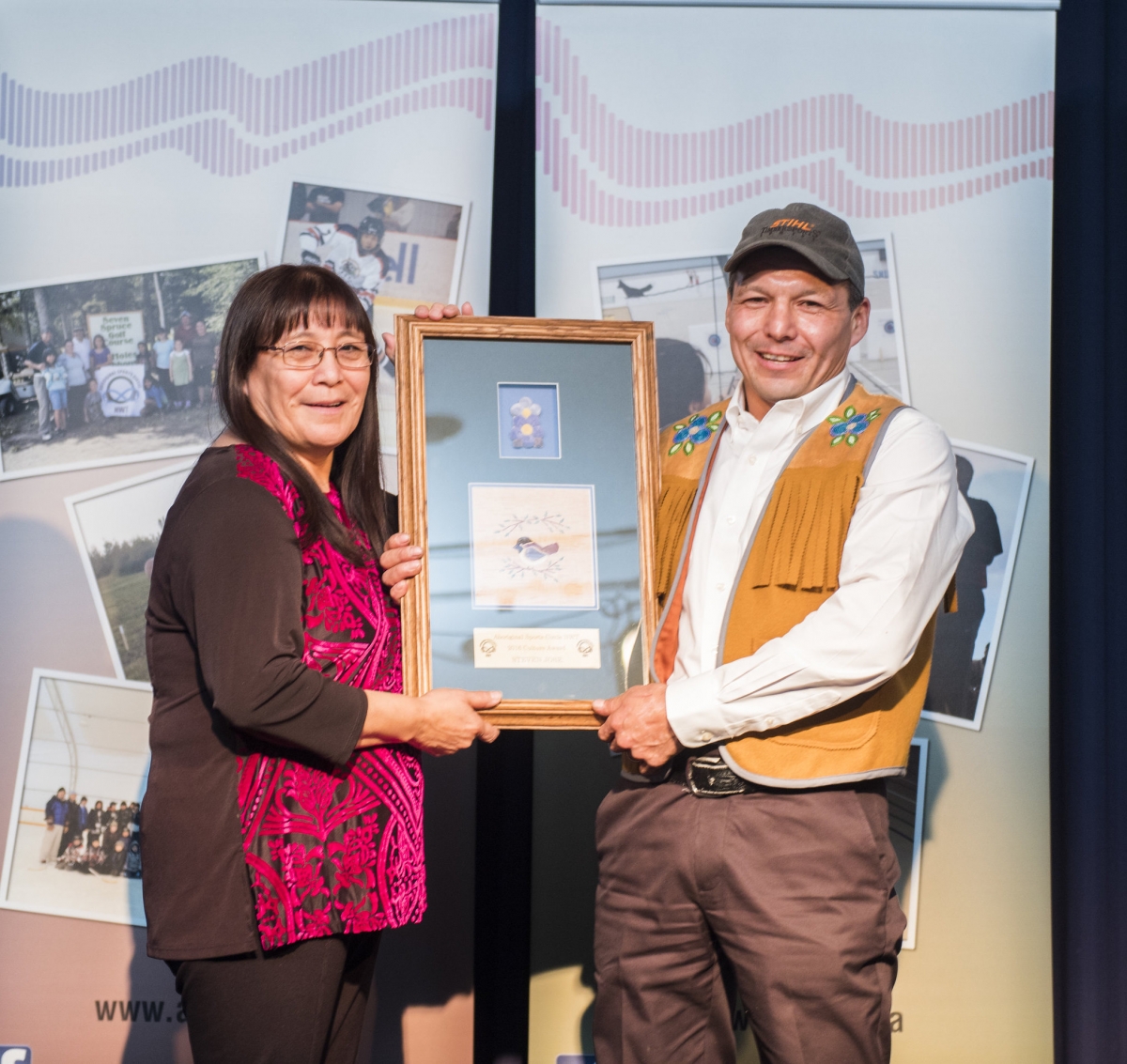 Steven Jose was born in Fort Simpson on April 9th, 1971 and was raised by his parents Eliza (Gombee) Cli and Leon (Guinsee) Sassie with his one sister, Cheryl. Steven was raised 32 miles down the river in an area called Two Islands, also known as Taggacho in Dene Zhatie.  He spent most of his childhood living in the bush at Two Islands as his dad decided Steven would not attend school at the hostel in Fort Simpson; rather he wanted Steven to learn the traditional ways of his own culture.

Early on Steven knew the ways of bush life. At 6 years old, he created his own 2km walking trapline. He would trap marten and squirrels, skin the animals, and sell the fur.  By the age of 10, Steven shot his first moose and proved he was able to help provide for his family. When Steven turned 17, his parents became too old to continue living in the bush, so the family moved to Fort Simpson. Steven took care of his parents until the day they died. From the age of 32 to the present day, Steven has been working at the Housing Authority as a housing maintainer. Although he has a full time job, he continues to trap and hunt on his land at Two Islands, where he built a new home, which he enjoys with his kids Sabowa, Gombee, Taggacho and his wife Leanne. He continues to pass on his cultural knowledge to his family, friends, and anyone interested in learning.

Steven has travelled to many areas in the Dehcho for fish, moose, caribou, and sheep to share with elders and other community members. He has provided meat for many community feast, funerals and assemblies. He is an active part of the Liidlii Kue Frist Nation Band office and was voted in as a councilor for three terms.  As well, Steven is the chairperson of the Harvesters Committee of the Liidlii Kue first nation.

Steven is a true “Dene” man who shares what he has, works hard, helps others, and passes on his knowledge.  Steven has been nicknamed the “golden boy” for continuing to practice and keep the Dene culture alive.

The Canada 55+ Games are a National multi-sport event, organized by the Canadian...

If you are Indigenous and interested in coaching, this program is for you!...

END_OF_DOCUMENT_TOKEN_TO_BE_REPLACED

ABOUT THE ABORIGINAL SPORTS CIRCLE WORKING IN YOUR COMMUNITY

Established in 1999, ASCNWT was created through a national consensus-building process in response to the need for more accessible and equitable sport and recreation opportunities for Aboriginal peoples across the Northwest Territories.

We believe that all Aboriginal people in the NWT should have the opportunity to participate in sport and recreational activities at a level of involvement they find meaningful and valuable.